Go to the cart Clear basket

DuoLife My Mind is a liquid dietary supplement that contains natural botanicals, including the proprietary formulas of CogniviaTM* i Aronvit®, enriched with inositol and an active form of vitamin B12 (methylcobalamin). The product is composed of highest quality natural raw ingredients supporting concentration, memory, and cognitive processes in both the young and elderly. It is a valuable source of vitamins and plenty of active compounds found in standardised plant extracts. Health-oriented effect of ingredients in this dietary supplement was proven by clinical trials and documented in scientific reports. 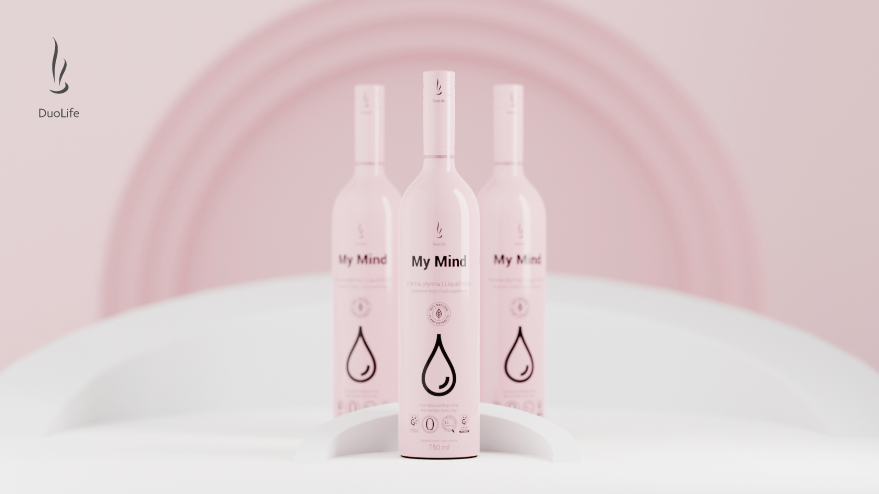 DuoLife My Mind is a liquid dietary supplement that contains natural botanicals, including the proprietary formulas of CogniviaTM* and Aronvit®, enriched with inositol and an active form of vitamin B12 (methylcobalamin). The product is composed of highest quality natural raw ingredients supporting concentration, memory, and cognitive processes in both the young and elderly. It is a valuable source of vitamins and plenty of active compounds found in standardised plant extracts. Health-oriented effect of ingredients in this dietary supplement was proven by clinical trials and documented in scientific reports.
Download the education sheet
Download the bibliography
Why use DuoLife My Mind?
Thanks to the properties of the ingredients contained in the product, the effect of supporting memory, cognitive processes, and concentration can be felt as soon as 1 hour after taking a single dose of the product. With each day of regular use of the supplement, the effect is enhanced.
DuoLife My Mind is intended for use as a supportive supplement for:
people who want to support concentration, memory, and cognitive processes on a daily basis;
active professionals;
knowledge workers, including students and pupils;
elderly people;
people with memory problems and symptoms of dementia;
people with concentration problems, at risk of chronic stress;
people dedicated to keeping the nervous system healthy;
people with lowered energy, vitality;
people with lowered mood.
What makes DuoLife My Mind stand out

Effects are visible as soon as 1 hour after application2

Enhanced effect if used for a long time

Check the effect with Cognivia App

Convenient form
of application
1applies to ingredients
2due to CogniviaTM*

Support for memory1
The product is composed of highest quality natural plant extracts and additional ingredients of natural origin: inositol and vitamin B12 supporting concentration, memory, and cognitive processes in both the young and elderly. The ingredients of DuoLife My Mind have been shown to support memory, concentration, and maintaining a good mood. these effects are scientifically documented and proven by clinical studies.
1applies to ingredients

Clinical studies on ingredients
The ingredients used in the product have been subjected to numerous, documented clinical trials.
There were as many as 7 (!) clinical trials for CogniviaTM*demonstrating the formula’s effects on cognitive and memory functions in humans [1-6a], involving both short-term and long-term memory.
Inositol demonstrates antioxidant properties, promoting the neuronal protection and supporting mood and energy metabolism of the body [7].
Ginkgo biloba exhibits antioxidant properties and promotes the proper condition of the cerebral vasculature, helping to improve cerebral circulation, and thus supports memory, attention, and learning processes [8]. Health-promoting effects of ginkgo were proven by hundreds of clinical trials [9,10].
Plant extracts of Rhodiola rosea, Schisandra chinensis, and Bacopa monnieri/Brahmi show adaptogenic properties, increasing the body’s ability to adapt to changing environmental conditions [11] and helping to protect the nervous system from damage. All three plant extracts have an influence on memory and cognitive processes as well as on mood and well-being, as clinically proven and widely documented in scientific reports [12-18].

Proprietary CogniviaTM* formula
Proprietary formula based on organic common sage (Salvia officinalis) leaf extract 5:1 and organic microcapsulated lavender sage (Salvia lavandulifolia) essential oil. CogniviaTM* is a clinically proven formula that, due to its properties, can improve memory function from the first day of use. This effect is enhanced with each subsequent day of use. The trials proved that lavender sage essential oil boosts mood as well as the quality and speed of memory, especially long-term memory, while common sage extract contributes to improved concentration and attention.

- summary of all statistically significant memory effects (p<0.05)
Figure 1 Study on working memory – effects following intake of single dose on the first day of the study and after long-term use (at least 28 days). Used cognitive tests belong to the renowned COMPASS battery and include the Corsi Blocks test, the numerical working memory test, and the face-name associative memory test. Based on [1-6a]. NS = results not significant

Effects after just 1 hour of use due to the proprietary CogniviaTM* formula
Clinical trials confirm the positive effect of the CogniviaTM* formula ingredients on long-term memory and cognitive function, visible after intake of a single dose of the product as early as 1 hour after application and may persist for several hours. 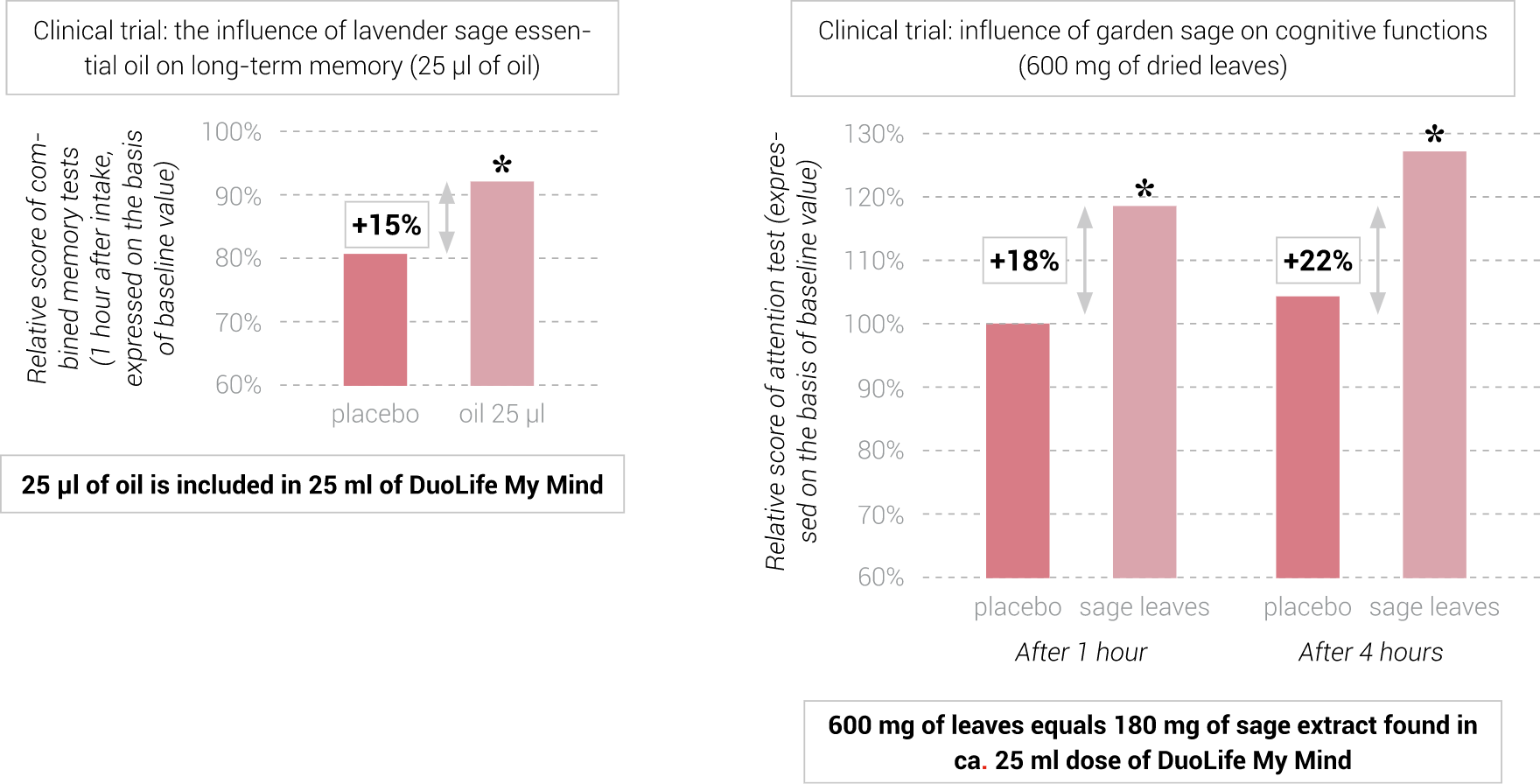 Figure 2 Results of selected clinical trials demonstrating the effects of lavender sage essential oil [1] and dried leaves of common sage [2] on long-term memory and concentration after just 1 to 4 hours after intake. * p < 0.05.

Enhanced effect if used for a long time
Most recent reports published in 2021 [6] show a synergistic effect of the whole formula on cognitive processes in both young and old people taking the formula on as-needed basis and for 28 consecutive days.

Figure 3 The reports of 2021 show the influence of the CogniviaTM* formula on working memory after one use on the first day of study, successively strengthened with application time extended up to 28 days. Based on [6].

Cognivia App
With the CogniviaApp, you can test the effects of the Cognivia™* formula contained in DuoLife My Mind on your memory processes. The app is available for phones with iOS. The app tests are identical to those under clinical trials.
Download →

MecobalActive®** – proprietary vitamin B12 formula
Active form of vitamin B12 (methylcobalamin) contributes to optimal functioning of neurons, supporting memory and cognitive processes.
Among cobalamines, methylcobalamin plays an important role in the processes of attention and learning [19]. Vitamin B12 deficiency is observed in people with memory and cognitive disorders. Its supplementation may significantly support memory processes in these people [20,21].

Aronvit®
Proprietary formula of chokeberry (Aronia melanocarpa) fruit extract standardised to 25% anthocyanins content. The chokeberry fruit contains ingredients with valuable antioxidant properties, such as anthocyanins, flavonols, phenolic acids, and tannins as well as vitamins (C, B2, B6, E, P, PP) and minerals (Mo, Mn, Cu, B, I, Co). Clinical trials and scientific reports from 2020-2021 show that chokeberry extract, if used regularly, has a significant influence on memory functions [22,23].

Gluten free
The product does not contain gluten.

Less is more
The product does not contain artificial flavours and fragrances, artificial fillers, and is free from GMOs.

Synergy of action
The carefully selected composition of ingredients contained in DuoLife My Mind promotes optimal memory, concentration, and cognitive processes. In vivo studies showed beneficial synergistic effect of both components of the CogniviaTM* formula. Study results prove that combining two sage types has a significantly better influence on memory processes than each of the types used individually. This effect is also visible after the first intake (1 to 6 h after consuming a single dose on the very first day of the study) and is enhanced with each subsequent day of use of the supplement [24]. 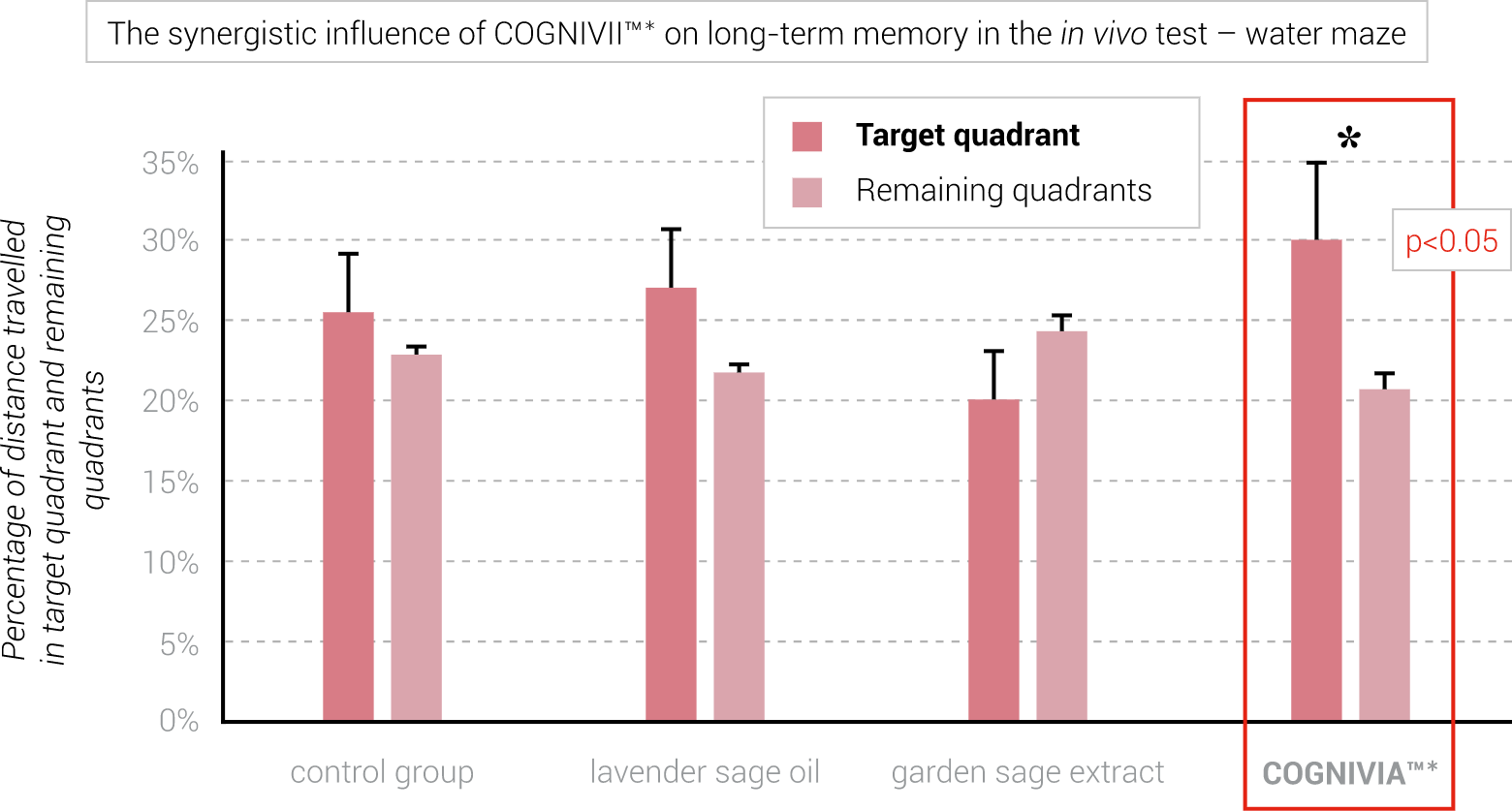 Figure 4: The synergistic effect of the COGNIVIATM* formula – the formula presents a significantly better effect on long-term memory in in vivo tests than all of the components tested separately. Based on 11.

Vegan
The product is suitable for vegans and vegetarians.


* CogniviaTM is a trademark of Nexira.
** MecobalActive® is a trademark of HEALTHTECH BIO ACTIVES, S.L.U.
Ingredient contents in the daily dose of the product
25 ml
50 ml
Inositol
1.5 g
3 g
CogniviaTM*- is a proprietary organic formula of common sage extract and microencapsulated lavender sage oil
300 mg
600 mg
Vitamin C from acerola (Malpighia glabra) fruit extract
52.5 mg (66% NRV***)
105 mg (131% NRV***)
Vitamin B12 MecobalActive®**(methylcobalamin)
100 µg (4000% NRV***)
200 µg (8000% NRV***)
***NRV- Nutrient Reference Value of an average adult (8400kJ/2000kcal).
People aged over 12: 25-50 ml in the morning, with meal. Shake before each use. Do not exceed the recommended maximum daily dose. The product should not be used as a substitute for a varied diet. Balanced diet and healthy lifestyle are the basis for proper functioning of human body. Should you have any doubts concerning the use of the supplement, consult your doctor or pharmacist.
Store in room temperature and keep out of the reach of children. After opening, store in a refrigerator and consume within 30 days. Protect against direct sunlight. As the DuoLife dietary supplement is a natural product, its taste and consistency may vary between its individual batches, depending on the season and raw materials used in its production. Natural ingredients may develop sediment which is typical of such products. Shake before use to remove any sediment.
Hypersensitivity to any of the ingredients.
Do not use during pregnancy or breast feeding.
Please refrain from using the preparation 14 days before planned surgeries.
If you have a chronic condition or are taking medication, consult your doctor before using the product.